125 years of sscc in the Netherlands 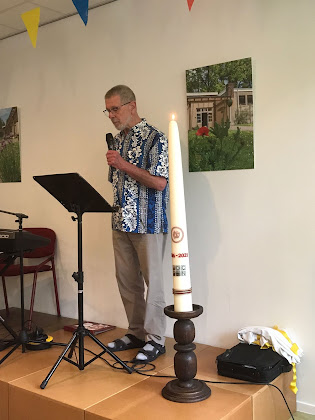 Dear confreres, sisters and members of the Secular Branch, dear former brothers and sisters, former students of the Damiaan College, with or without your partners, dear employees of the Damiaan Centre and of the community in Teteringen, and last but not least: dear fellow brothers from Flanders, Germany and Indonesia; Dear Derek and Alberto. All of you, welcome to this day, the celebration of 125 years of sscc in the Netherlands.

I would have liked to welcome a few others. But that is not possible because they have had to unsubscribe, because of old age, illness or any other reason. These are: Tiest Bogaarts, Jan Rood, André Haarbos and Jan Kouwelaar and also Jean-Blaise Mwanda Ndozi, member of the general council. He has unsubscribed due to corona quarantine. I must also mention Karel Steenbrink, but with a moment of silence. Karel passed away quite suddenly a few weeks ago. He was suffering from stomach cancer. May he rest in the peace of the Lord.

Actually we should have gathered here on 11 June, because on that day, 125 years ago, on 11 June 1896, the Flemish Father Willem de Boeck arrived in Grave with nine Dutch boys from Aarschot in Belgium. And the next day, on the Sacred Heart Festival of that year, the first foundation of the Congregation in the Netherlands was officially opened, under the name 'the Damian Foundation'. And thus began the life of the Congregation in the Netherlands.

I am not going to give you an overview of the history of those 125 years of sscc in the Netherlands. The different facets of that history will be discussed globally during the power point presentation this afternoon. I'm limiting myself to one facet of it now, but I think it's the most wonderful: the people who made this history possible. Out of necessity - due to lack of time - I limit myself to the share of the fathers and brothers.

The sisters and the Secular Branch are not discussed today. It is of course abundantly clear that they are part of this 125-year history. But… in 2003 we celebrated the 100th anniversary of the sisters exuberantly and who knows, maybe in three years' time we will celebrate the 25th anniversary of the Secular Branch. That is why today I only pay attention to the mission of the brothers and the fathers. 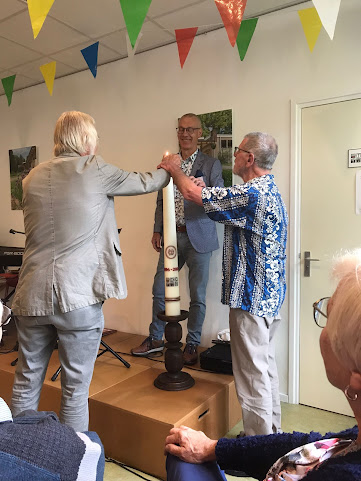 The four of us are the last workers of the hundreds that the Lord of the harvest has summoned in the Netherlands in these years to sow his word, his Good News over his fields.

I should say it differently: we are the last grains of the handfuls of grains that the Lord of the harvest has sown in his fields. As you know, those fields are now spread all over the world, on all continents. Most of the grains have died in the earth there in the past years and brought forth their fruit, thirtyfold, sixtyfold, a hundredfold. We are going to thank the Lord of the harvest for that in the prayer service.

There were also grains which the Lord of the harvest - consciously or unconsciously - so scattered - along the road or on rocky ground - that they have developed in a different way. And then I think of the fellow brothers and sisters who later left and became, and often still are, of service in their own way within the church and our society. And I am thinking of those who e.g. keep the spirit of Damien alive through this Damien Center. How many parishes, schools, municipal authorities, social institutions and the like have not benefited from their inspiration and enthusiasm? Much has been done by them in liturgy, catechesis and parish building work. For that too we may in a moment thank the Lord of the harvest. 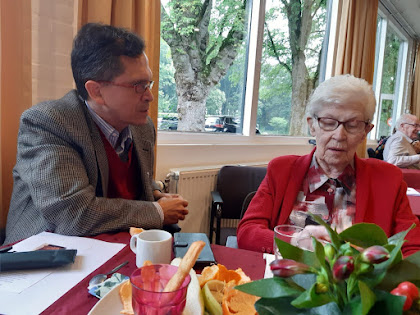 I also thank the Lord of the Harvest for the four Dutch colleagues who are still working elsewhere in the world, or who are enjoying their well-deserved rest there: Jan van Agt in Portugal, Paul Dekker in Brazil, Jan Heuts in Indonesia and Ton Hutjes in Singapore. They are allowed to experience in those countries how the Congregation has developed there.

And now a heartfelt word of thanks directly to the former Flemish province, now the Flemish delegation, for the fact that a new branch was grafted onto the sscc trunk from Flanders 125 years ago. Thanks to the Flemish province and especially thanks to the shining example of Damiaan De Veuster, this new shoot on the tree has proved viable. And it grew into perhaps the most missionary branch of the Congregation, in any case one of the most missionary branches.

Thanks also to the German province, which has literally helped us out of the fire twice in our history. How exactly that happened is history and will be returned this afternoon in the powerpoint presentation. But a word of thanks to them is certainly in order here.

Finally, thanks to the General Council, whose Superior General Alberto Toutin and Councilor Derek Laverty are in attendance today. In them we may thank the Congregation for everything that the Congregation has done and meant for us in those 125 years, and for the opportunities we have had within and through the Congregation for our personal development, through our studies, our activities, and worldwide experiences. Thank you very much, dear Congregation of the Sacred Hearts.

Dear brothers and sisters, I am going to end with a couple of remarks.

The first is that for a few days – mind you, only for a few days – we have been discussing a wonderful offer from the Indonesian province with the general council and with the province of Indonesia. This offer means that this province is prepared to send a few confreres to the Netherlands, with the intention of continuing the presence of the Congregation in the Netherlands in the near and hopefully distant future. A wonderful offer that we want to take seriously. Hopefully it will bear fruit. We ask the Lord of the harvest for his abundant blessings on the province of Indonesia.

The second remark is that Theo van Zoggel, as I said earlier, has just celebrated 65 years today. We cannot just let this fact pass by. I therefore propose that you personally congratulate our jubilee in a moment and now sing to him together. And that that 'Long live' may also apply to our entire Congregation!! Thank you.