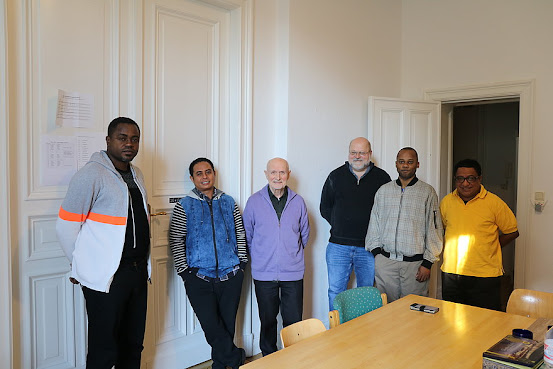 Founding a new community is not an everyday task these days. To found a community in which religious from three different continents live together increases the challenge considerably. When such a foundation falls in the middle of Corona time, everything is even more complicated.

At the end of October this year, I visit the Berlin community, which is located in the Charlottenburg district just a stone's throw from the banks of the Spree. As I leave the wide Otto-Suhr-Allee and walk around the imposing Charlottenburg town hall, I find myself in a quiet street in front of the Sacred Heart Church and the rectory with an impressive red brick façade.

Six Fathers belong to the new SSCC community in Berlin: Patrisius (Patris) Breket and Dionisius (Dion) Watun come from Indonesia, André Kibeti and Crispin Badinga come from the Democratic Republic of Congo, Harald Adler and Ludger Widmaier belong to the German Province of the Congregation. However, not all of them were in Germany at the official start last year; the two brothers from the African Province only arrived in Berlin three months later. First there were problems with the visas, then Corona made the journey from Kinshasa to Germany impossible for a long time. So the two were also unable to take part in the several months of joint preparation in Werne.

"This double start was not so ideal," recalls the superior of the community, Father Patris. At the same time, he is very grateful for what has developed since then. "The way we deal with each other, help each other, that is really good. Our first concern is to live as a community. Only then comes the question of our mission and then the clarification of what we can do here." Father Crispin also regrets the unfortunate circumstances at the beginning: "During their time in Werne, Patris and Dion had the opportunity to learn the German language together and in presence. Now there are only online courses, which is not so good."

The fact that German is a difficult language is emphasised in unison by the African and Indonesian Fathers. "Learning German means suffering a lot," Crispin Badinga says with a twinkle in his eye. It is difficult, he says, but not impossible. Even though they have already learned a lot, pronunciation remains a challenge. We have the conversation mostly in English and French with German sprinkled in. 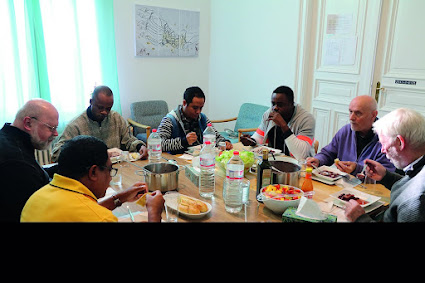 Corona has not only made it difficult to start and learn the language. The ongoing restrictions due to the pandemic also have an effect on everyday life: There is a lack of opportunities to meet and get to know the city, the country and the people, and even getting used to pastoral tasks is not easy under Corona conditions.

When the six brothers were asked by their superiors whether they wanted to become part of the new Berlin community, there was no question of such adverse circumstances. Gathered around the table in the dining and living room, they all remember that moment. The senior, Father Harald, had just returned from the Philippines where, after a long professional life as a teacher and headmaster of St. Christophorus High School in Werne, he had worked for another 15 years in the formation of young brothers and in a parish in the poor settlement of Bagong Silang on the northern edge of Metro-Manila. "I thought that Berlin could be a new and good task for me," the 84-year-old recalls.

The second German, Father Ludger, also found it relatively easy to say yes. He, too, lived abroad for many years - in Argentina - and appreciates the international dimension of the religious community. At first he had reservations about whether they would succeed in the new community in dealing well with the cultural differences that the individuals bring with them. "Now I am surprised how well that went. I have the impression that everyone can feel comfortable here."

It was steps of a completely different scale for the other four, even though all of them had already had experience of the internationality of the congregation and had lived abroad for a time before. "I already asked," says Fr Patris, who last liv     ed in the Philippines, "if someone else could do it. But my provincial said that my experience was needed. I had been responsible for preparing young people for their perpetual vows in the Philippines for three years. It was precisely because of this experience that I was also open to new things."

Father Crispin knew Germany from a short visit a few years ago. But he didn't really know much about this country. "That's why it's good that we're not here to work first, but to learn first." This is also important to his compatriot, Father André. "As in the triad of our spirituality - to contemplate, live and proclaim the love of God - it goes with our community. Before action comes a time of integration, of getting to know each other."

"I was really a bit scared at first," recalls Father Dion, who had never been to Europe before. He asked: does this really have to be, a year after ordination? Am I suitable for this? "After a period of reflection, I decided to take up the challenge and help build the new community."

That is what the six brothers have focused on: building the community. First of all, they do it very practically. "We do everything ourselves in the community: from shopping and cooking to washing clothes and cleaning the rooms," explains Father Patris. On the day of my visit, it is he who stands at the cooker and prepares lunch. A tasty bean soup is served, which, with its spices, is somewhat Christmassy for the German palate and has already been jokingly nicknamed "Christmas soup".

The six have formulated their attitude as follows: "We are weak, we learn together, we help and support each other." In other words, it is not the position of strength that they take. As an international community, it is about learning together, dealing with daily challenges and understanding that they depend on each other and complement each other, says André Kibeti.

Ludger Widmaier adds: "We recognise that each of us has our strengths and weaknesses. Together we can broaden our horizons, first for ourselves - and then for others."

Even though the focus is on community life and their witness as religious, the brothers also take on tasks in various pastoral fields. The parish of the Sacred Heart forms a parish together with the parishes of St. Thomas Aquinas and St. Camillus. Father Patris is mainly involved in this work. Other fields of work are the French and English-speaking communities in Berlin.

Here, too, there is much to learn. Not even 10 per cent of Berlin's inhabitants belong to the Catholic Church, just under 16 per cent to the Protestant Church, and around 8 per cent profess Islam. Two thirds have no religious confession.

Being in the minority as Christians is something Indonesians also know from their home country. Only a good 10 percent of the inhabitants there are Christians, 3 percent of them belong to the Catholic Church, while almost 90 percent are Muslims. "In Indonesia, Christianity is growing, in Germany it is shrinking," says Father Dion, describing the difference. When sometimes no one comes to mass, we ask ourselves why we are actually here. "At the same time, I know that we are here to proclaim the Gospel. And the people we meet share their faith with us, evangelise us." "And the people here are happy about our presence," adds Fr Patris.

What do they wish for in view of the community's second birthday in August 2022, I ask as we sit together over a cup of coffee after lunch. They all hope to make great progress in learning German. "We are doing our best there," says Father Patris, also speaking for the other three. In addition, all six hope that Corona will not continue to slow them down, that they will get to know their surroundings and the people who live there better. They want to take the next steps in pastoral tasks and deepen their understanding of their mission as an international community SSCC in Berlin. Along the way, their mission statement remains: "We learn together, we help and support each other."

(Peter Wegener was a confrere in our community for a long time, until he found another way to live life and faith for himself and his wife. He works in the press centre of a diocese and is a permanent member of the editorial staff of the "Apostel", the magazine published by the German Province). 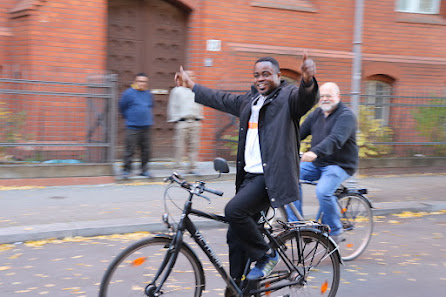 The members of the SSCC community in Berlin

Father Harald Adler, born in 1937 in Gnadenfeld near Odessa on the Black Sea in the former USSR, came to Germany with his family in 1944. After attending the Johannesgymnasium in Lahnstein, he entered the religious community in 1957 and was ordained priest in 1962. After years as a teacher and headmaster of the college in Werne and then as a formator of the order's junior staff in Manila, he was most recently active in a parish in a district of the greater region of the Philippine capital Manila.

Father Crispin Badinga, born in 1982 in Kikwit/Kwilu in the Democratic Republic of Congo, entered the religious community in Mozambique in 2013. He was ordained priest in 2016 and was most recently a vicar in a parish in the DR Congo.

Fr Patrisius Breket, born in 1969 in Kluang-Flores in Indonesia, entered the religious community in 1992 and was ordained priest in 2000. In recent years he has been involved in the formation of young brothers in the Philippines.

Father André Kibeti, born in 1979 in Kisangani in the DR Congo, entered the religious communi

ty in Mozambique in 2005. He was ordained a priest in 2010 and was most recently the parish priest of a parish in the DR Congo.

Father Dionisius Watun, born in 1984 in Lewokluo in Indonesia, entered the religious community in 2006 and was ordained priest in 2017. Until he moved to Berlin, he worked in a parish in Bandung, Indonesia.

Father Ludger Widmaier, born in 1964 in Bockum-Hövel, graduated from St. Christophorus High School in Werne. In 1987 he entered the religious community and was ordained priest in 1996 in Morón-Sur/Buenos Aires in Argentina. Most recently he worked in the city pastoral in Koblenz. 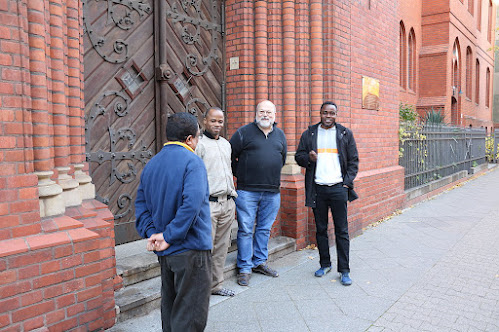 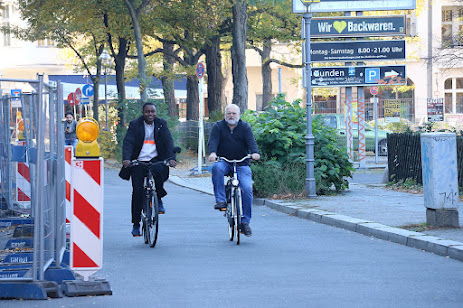 Posted by SSCC Picpus Blog at 5:38 PM No comments: