I want to give my best and we have to believe in God, everything will go well 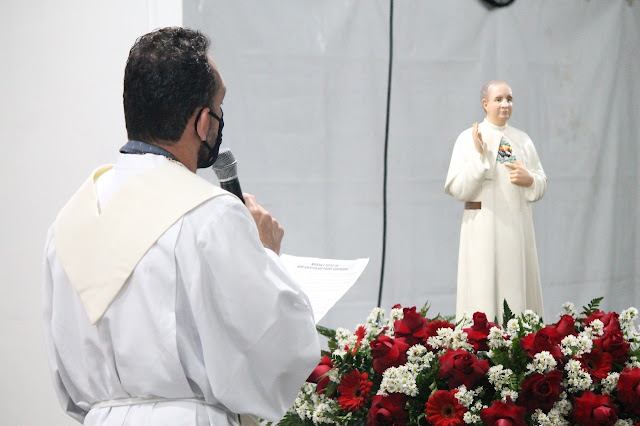 On this Feast Day of our brother, Blessed Eustáquio I use as a title for my reflection his own words:  “I want to give my best and we have to believe in God, everything will go well”.

Eustáquio was born in Aarle-Rixtel (Holland) in the diocese of Hertogenbosch, on 3 November 1890 and was baptized on the same day. His name was Humberto. Before he became an SSCC religious there were people in his family and in school who doubted his vocation.  Finally he said to his father “I want to give my best and we have to believe in God, everything will go well”.  Following God’s plan he entered the formation process and finally he became  a priest and served the faithful. He was from a simple family, his father was a famer in Barbante and in his house they were fourteen.  Eustáquio was the eighth of eleven children along with his parents. Although he was from a working family it did not prevent him to attend daily eucharist. Every day he attended the eucharist so that both at home and at work there was a peaceful atmosphere and the family grew in solidarity. Because the terms and conditions of ordination required the priest to be educated, Humberto attended school under the tutelage of Sister of Charity of Schijndel and was then tutored by a famous catholic teacher named Harmelinck.

After finishing his junior high school, he was accepted as a novice on 23 September, 1913 in Tremelo in Belgium. He chose the religious name Eustáquio by which he became known later.  He took his first vows on 27 January, 1915 in Grave (Netherland) and his perpetual vows on 18 march 1918 in Ginneken (Netherland). In 1915 he completed his philosophical education and from 1916 to 1919 he continued his theological education at Ginneken. His teacher knew that he did not have sufficient capacity for metaphysical questions but realized that he had a good vision of logic and wisdom in moral matters. Finally  he was ordained a priest on 10 august 1919. His father was so happy to see his son celebrate mass at the altar because especially as he had earlier believed that Humberto (Eustáquio) could not be a priest.

Eustáquio started his ministry in Vierlingbeen as an assistant novice master.  After that he continued his ministry in pastoral care in Maasluis among the Wallons and French-speaking glass workers for around two years.  He showed a great zeal for service among these people.  His zeal was  recognized by the Belgium government and they awarded him a medal for serving minority groups who had fled to the Netherlands. In December 1924, Eustáquio was sent to Spain to study Spanish as he was to be sent as a missionary to Uruguay.  However in the end he was sent to Brazil which speaks Portuguese. Father Eustáquio wanted to become missionary and that wish was only fulfilled when the Dutch Province searched for a mission in Latin America and established a foundation in Brazil.

In Brazil Eustáquio began his ministry and became known all over Brazil. Father Eustáquio arrived in Rio De Janeiro on May 12, 1925 and worked as a missionary for eighteen years in Brazil, Ten years in Agua Suja (1925-1935), six years in Poa (1935-1941) and two years in several other areas. In Brazil they knew him as a true missionary because he served them with great zeal. From this area he showed a great zeal for service, he gave himself especially to the poor and sick, bringing healing through his ministry. Because of his deeds many people want to be with him;  in his ministry in Poa, he had the special ability to heal through the intercession of saint Joseph. This activity was specially directed at strengthening the faith of people and freeing them from their tendency to believe in superstitious things.

There are people who doubt about his ability to be a priest, but who are they? Talking about vocation means talking about the grace of the Lord.  If the Lord want to him be a priest nobody can stop him. He is offering himself to God, he believes that God is going to accompany him in his vocation in this congregation (SSCC) even though he is full of limitations. God becomes his power through his limitations.  God is with him in his ministry. When you read  the story of his life in Brazil you can see how many people were converted because of his miracles.  He was very aware that healing’s miracles did not come from his power but from God.  As such he never said the miracles comes from him. Obedience toward his superiors was very strong, he does everything superior asked of him.  He was exemplary in this until the end of his life.

I would like to state how, in his journey of life as a priest and religious,  God wanted to show, “what is started by Holy Spirit, will be ended by holy spirit as well”.