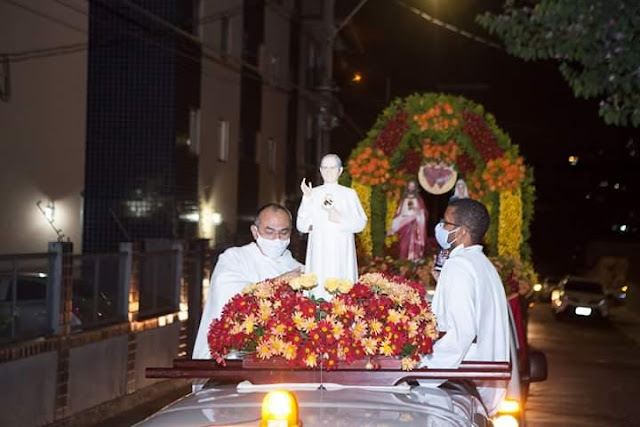 The Life of Fr. Eustáquio is an inspiring story. For me personally it is not only because of his healing miracles but for his willingness to relate with the people, especially the sick and the outcast.

One of the stories of him that touched me is when he had just moved to Poa after the great miracles he did in Romaria. After his arrival he experienced difficulties in his relations with the new people and the environment of the city. It was written about him; the Pastor who was accustomed to a role that placed him at the centre of attention in the places where he had formerly ministered was at first amazed. No one sought him out, neither the children nor the women who lived in the locality. He had an empty feeling of uselessness, discomfort, and even rejection. These feeling were only overcome when he discovered that he needed to adapt himself to the new needs and to adopt new strategies and new ways of handling himself.

It speaks clearly that he was a creative missionary. I believe that every person experiences something similar when he or she arrives at a new place. Moving from a ‘comfort-zone’ comfort is always disturbing, especially if the new place and environment is far from what he or she was hoping.  Instead of complaining and grumbling, Fr. Eustáquio thought of new ways to deal with this situation. His strategies to attract the people in Poa could be a great example for a young missionary like me, that it is better to adapt to the situation than to feel regret whole day. The way he used was a simple approach; he evangelised, calmly, through conversation. Starting with a smile and conversation there followed an invitation to the faithful to come to the Church, and thus the delicate relationship was strengthened bit by bit.

There was one thing that Fr. Eustáquio committed faithfully to during his life, no matter where he was assigned: visiting the sick. His main concern was the sick, perhaps because God he was aware that God had granted his hands healing powers. But for him, nonetheless, his actions did not appear more than a simple human duty that anyone would do if they were aware of their obligation and the consequences of their vocation to serve. All this shows his humility as a person and missionary.

The other thing is his awareness of himself as a priest. Regardless of how so many people knew him as a miracle worker, he dedicated himself exclusively to his own priestly functions without letting go of social action, Christian charity, justice and peace. It is true that we need to be aware of our first duty, priority, and for what reason are we here, as religious and as human beings.

In my opinion I believe that nobody expects to have responsibilities beyond their ability. But as I experience it now, the responsibility I have is something that I never thought of before. Here I always quote the word of St. Paul: “His grace is enough for me...for power is made perfect in weakness.”

In my study and mission in Gantang and also in the local Baciro Parish Church sometimes I feel disappointed with people who do not show interest in me as I expected. This made me conclude that they did not accept me and had rejected me.  But we see how in Eustáquio his experience in the past did not affect his faithfulness to his duty and vocation to serve. To serve is the most important thing in my life as a missionary and the rest God will take care of the rest.

I believe that if God gives me something to do which I don’t think I am able for, He will give me the strength and ability to do the things that I have to do for Him. This is the mystery of His power in my life ... in all the lives to whom He. trusts.

In the end all is for the Glory of God... “Our action is a simple duty that anyone would do if we aware of our obligation and the consequences of our vocation to serve.”